Google has offered up another new toy for analyzing texts. I’ve been growing in my appreciation for Google Books and its controversial program of scanning in old books because it makes available, sometimes in pdf form, out-of-print texts which are not easy to locate. So now when doing research it is quite easy to track down footnotes, whereas in the past one had to copy the reference down, trudge over to the library, fill out an ILL slip, hope our librarians found a library willing to lend a 150 year old book, and then wait for it to arrive. Instead of weeks of hoping to get a glimpse of a page, now often you can find things instantly, delivered right to your desktop. (No, I don’t get paid by Google for my posts).

This new tool is Google Books Ngram Viewer. It takes all these books scans, converts them to text, and then allows some kind of concordance search on those texts, spitting back results giving a frequency of occurrence of the word(s) over a span of time. Great fun. So now you can search for, say, “speaking in tongues” from the years 1700-2000 and notice that it is non-existent until the early 19th century, rarely used before the second quarter of the 20th century, and then a tremendous growth in uses — as a percentage of all words used — beginning in the 1970s. Hmmmm, I wonder why? I have no idea how scientifically valid this all is. A paper published today in Science Magazine offers up the argument for its use.

This can lead to all sorts of interesting searches, and following on them all kinds of speculations about why. Let me play a little.

“Praise band” does not occur until about 1990 — what a surprise! 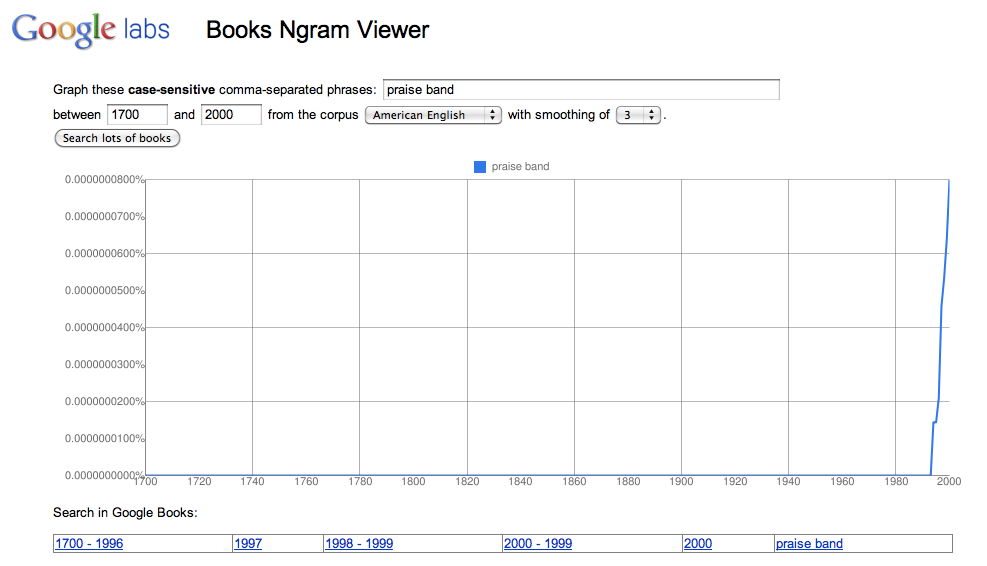 But then, “historic liturgy” seems to be a fairly recent coinage as well: 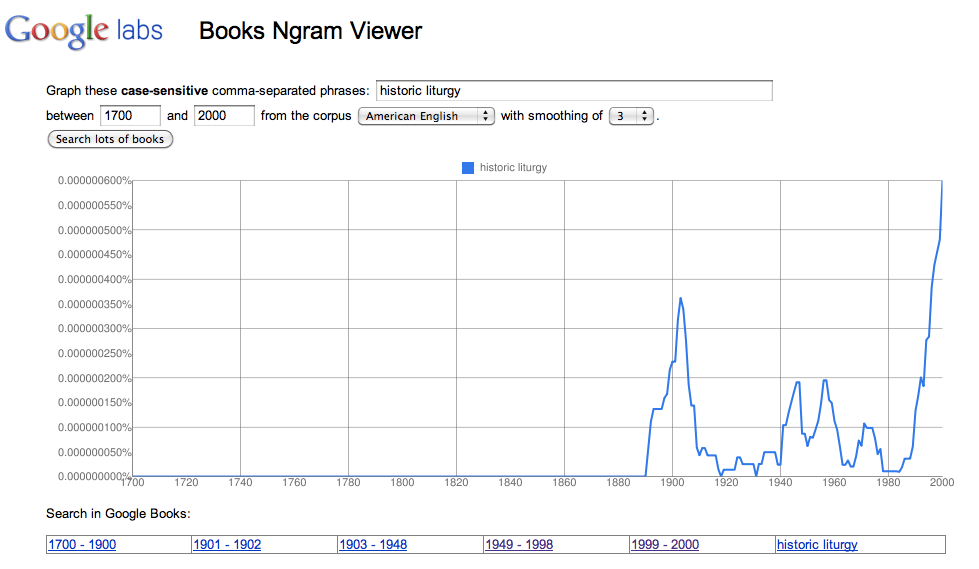 And, if you load the page via the link above, those links by date at the bottom of the graph will load a search that links to the actual citations. For “historic liturgy” there is an interesting list of authors and sources, some of which may be surprising. It helps get a feel for who is using the words initially, and then who adopts them later on.

One term I’ve heard discussed as being a “new word” is “inerrancy.” Sure enough, “inerrancy of Scripture”  does not occur (except for an apparent machine reader error) until the late 1880s, and then it is used by Charles Briggs and the Presbyterians. What about the German Lutherans? You can also search in German for “Irrtumslosigkeit” — and find the same spread. “Infallibility,” the traditional term, is used earlier, spikes in the 1860s (why?), and then trickles downward, apparently as “inerrancy” becomes the term of choice.

And this is really cool — you can relate two terms to each other. For example, I’ve wondered when the “Authorized Version” (the name given it by King James) became the “King James Version.” Apparently it was the late 1970s: 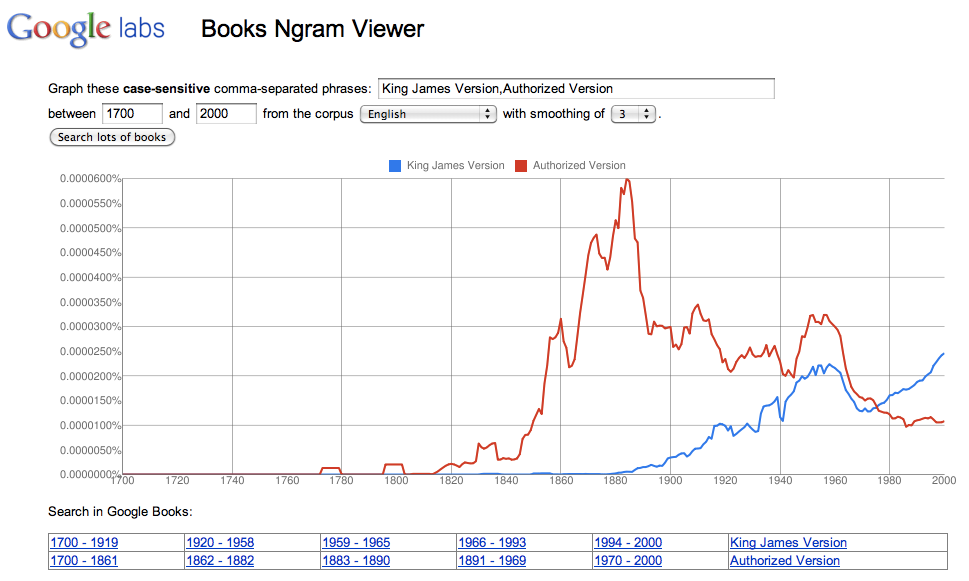 Now, historians (at least good ones) will use this with caution: The source data is not complete, it contains only published material (not oral or private correspondence — try comparing “Merry Christmas” to “Season’s Greetings” — doesn’t work), and “concepts” can exist even if the word doesn’t. Heck, pastor’s winkels are in there either. But it does give a quick, down-and-dirty, and free(!) way to see what is going on, and start to ask ourselves some questions. For example, what does it say about us that we get worked up over things that no one did before, or, conversely, stuff that worked people up a century ago doesn’t even blip on our radar screen? Should we insist on very precise formulations, when those precise words will come and go? Here is a mirror, go and look.

"Common Callings and Ordinary Virtues deserves a wide reading if for no other reason than to help those of us who live in an age of hyperbole and what is purported to be extraordinary and unprecedented events to be simple people who follow Christ in the everyday and who excel at being boring in the best possible way." Dr Joel Biermann from his review of COMMON CALLINGS AND ORDINARY VIRTUES: Christian Ethics for Everyday Life by Brent Waters.

Dr. Robert Kolb writes about the work of Dr. James Arne Nestingen and of their friendship.

Repentance starts with being honest before God and ourselves about who we are. 'Honest Repentance' is the theme of our 2023 Lenten sermon series. This series consists of six doctrinal sermons exploring the nature of repentance, designed to be preached during Wednesday night Lenten services.